First of all, I want to thank everyone for their support of this blog... and this is by no means a goodbye. I am simply starting something fresh and new.

I've changed so much and I felt that in order to embrace classic films again, I needed to alter my approach. I hope you don't mind too much.

Please come see what I've been up to over at:

See you soon!
Posted by Kelley at 8:25 PM No comments:

Such a "Notorious" Evening 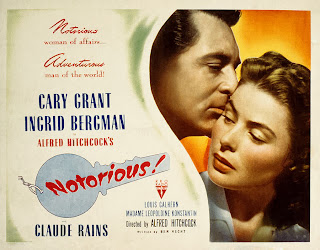 There is nothing quite like sharing one of your favorite movies with someone... Especially when they've never seen it before. Tonight we watched one of my favorites: Notorious.
Watching my friend squirm and hold her breath was so satisfactory because I've seen the movie dozens of times and I still feel my stomach drop each time Claude Rains lays eyes on Ingrid Bergman.

Notorious is such a quintessential Hitchcock and I love using it to introduce classic film newbies to his style. People often times have the wrong idea when they think about Hitchcock. Horror movies have changed dramatically since the golden era. When people think of scary they automatically think of paranormal death threats, haunted ghost children or dismemberment by clowns... cheap tricks if you ask me. Hitchcock played on our fears in a more psychological way. When Ingrid Bergman is securing the key to the infamous wine cellar without her husband knowing, you can't help but cringe. You can see her husband's shadow as he's talking to her from the bathroom as she fiddles with his key chain... she gets it off just in time as he walks in and approaches her. He grabs her hands (all the while she is clutching the key) and opens her palm to kiss it. You can feel yourself tighten up, terrified that he's going to discover what his secret agent wife is really up to. That's how Hitchcock works: subtly. That singular scene is so short, so important and is a perfect example of how simple our fears really are.

Yes, the shower scene from Psycho is brutal. Nothing subtle about that. But that isn't my favorite Hitchcock. I prefer the artistry of his slow build and Notorious is the perfect display of his film artistry. There aren't any hippy-haired girls crawling out of TVs or chainsaw wielding rednecks but I dare you to watch Hitchcock and not feel fear growing in your belly.

I feel that suspense trumps gore everyday of the week especially when wielded by a master craftsman. 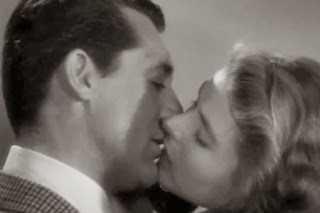 Side note: This is also a very sexy movie! There is an entire scene where Grant and Bergman are constantly kissing... they even deliver lines while kissing. Their arms and lips never leave the other. It creates such a deep warm intimacy, I almost feel like I'm encroaching on a private moment between two lovers. When Grant comes back with the mission in tow, the change is painfully evident. The covers are thrown back and a coldness creeps in. I always feel my heart break as the two characters push the other away. Hitchcock knew how to get around the production codes and he never fails to add sensuality into his films.

Posted by Kelley at 1:44 AM No comments:

Why do I love the film Charade? Too many reasons to count!
Maybe it's because my high school gym coach/history teacher made us watch it in class... which was amazing! (Of course he is the same man who would show Andy Giffith reruns on Fridays when he was prepping for the Football game).
Perhaps its because of Cary Grant's oh so charming portrayal of several differnt men--and yet is always the same wonderful guy... confused? So was Audrey Hepburn!
Speaking of Audrey... I do absolutly love her in this film... She is audacious, gullible, brave and I like how she always knows exactly what she wants... even if she isn't sure what that is!
The movie is a bit dirty in places... that could be a major reason for my constant rewatching of it. I mean, there is a whole scene of Cary Grant rubbing an orange all over a woman's bosom using his chin! ... Juicy...Those French knew how to throw a floor show! Audrey comes on so strong and it's amazing Cary keeps his composure for as long as he does... If you need some good flirting tips ladies, just watch Audrey and take some notes! Brilliant! "How do you shave in there?"
That could even be another post one day... How Audrey Hepburn taught me to flirt without the use of Marilyn Monroe techniques! (Cuz let's face it, we weren't all blessed with a decent pair of those!) 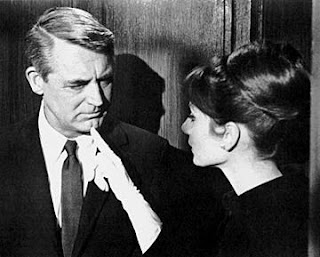 ** You can catch it on Instant Netflix**

Posted by Kelley at 9:54 PM No comments:

If I could open my closet door and find these 4 looks ready and waiting.... I would be one happy girl! 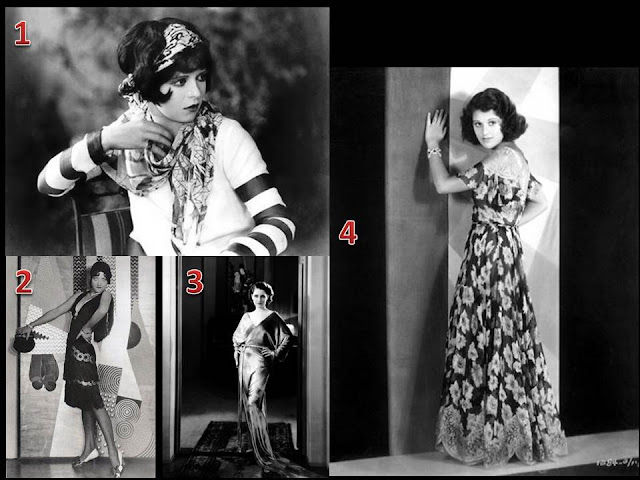 1. Clara Bow in an adorable layered look. I love the striped sleeves and the patterened bandana together.
2. Plunging neck line.. Check! Fringe.... Check! Flapper galmour... Double Check! Yes please!
3. How could Clark Gable do anything but succumb to Norma's charms in this delightful number? Every girl should have her own sexy velevet robe (complete with a rope belt!)
4. The cut of this dress with the flora print and lace looks so romantic. I would love it in a deep burgundy with white lace and print. ( I wouldn't scoff if the bracelet accompanied the gown either...)
Posted by Kelley at 12:13 AM No comments:

I've been gone from here for a long time. Between school and work, life had gotten unbearably busy.

Then the unspeakable happened. My family and I suffered a devestating, earth shattering loss... and I think I am still trying to pick up the pieces, the trouble is... I don't even know where to start.

In the wake of grief, people tend to remember what makes life worth living, and I've decided to reclaim what is mine... it may not be much, but my thoughts and opinions belong to me. And this blog, this outlet, is my comfort. Sharing with others who understand my interests and hobbies makes me feel connected and no so alone in such an ecclectic passion.

So, I've revamped the blog's image, (a gorgeous Clara Bow) and will put this piece of my life back together...
Posted by Kelley at 11:32 PM No comments: 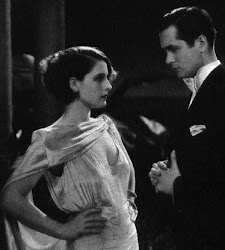 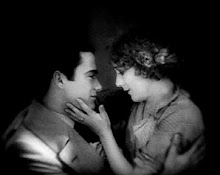